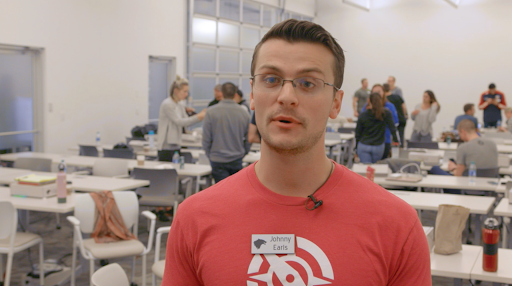 Meet Johnny--- he used to work in a high volume insurance based PT practice. He’s a movement based clinician in the Dallas area.

Johnny and I spoke a couple months after he started his practice. He was struggling with gaining traction and root cause of his problem was something I knew well.

You see, Johnny isn’t from this area originally. He moved to Dallas to start his practice but isn’t from Dallas originally. He had no deep roots in the area. No family and friend structure that can really help you when getting started.

I had the same issue I had to deal with when moving to Atlanta after leaving the Army. If nobody knows you, it’s hard to build a local service business.

He decided to dive head first into the PT Entrepreneur Mastermind and we started with helping him leave his regular clinic job as fast as possible. Within a couple months, he was full time in his own business and started seeing massive business progress from there.

Problem: Great clinical skills, minimal business skills. Nobody knew who he was in the area.

Did it work? Yep, Johnny was able to leave his clinic job to focus only on his own practice. We helped him organize an effective local marketing strategy to get his name out there and build awareness. This worked like a charm and he was able to break the 6 figure mark his very first year in business.

He consistently breaks the 20k per month revenue mark and is bringing on his first staff PT as we speak.

Here’s what I can tell you about Johnny.

He’s hungry, driven, up for the work and he listens.

Getting out in the community and meeting people can be tough. It’s uncomfortable, sometimes you get turned down and it can hard on your confidence. It is a really important part of owning a local service business though. Johnny showed a massive amount of grit putting the work in to really build his companies name in the area.

Too often entrepreneurs try to change everything at once and that’s a great way to get nothing accomplished. With Johnny, it was narrowing down exactly what he needed to do and help support the change.