E225 | One Tweak To Improve Workshops 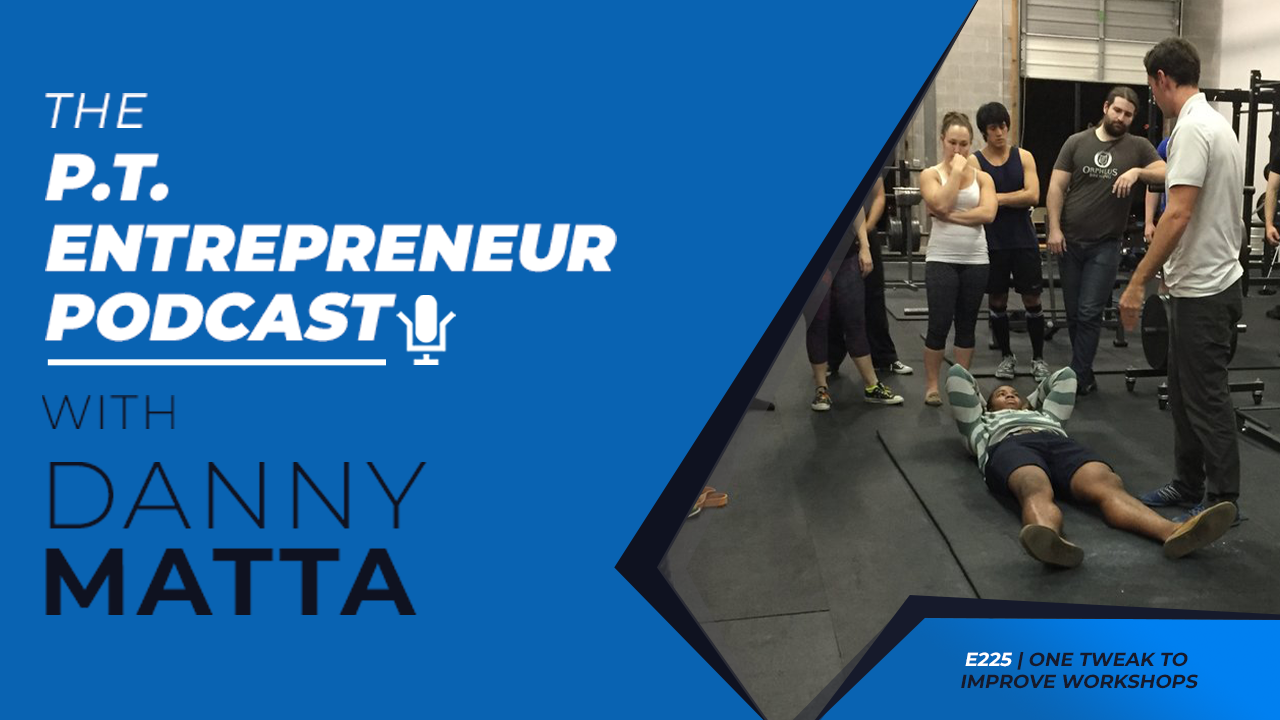 If you are not running workshops, I highly recommend you begin holding them as soon as possible.  Today I discuss the biggest mistakes I see people committing when holding their own workshops.

Hey, what's going on, guys? Doc Danny here with the PT Entrepreneur Podcast, and today I'm getting into one of my favorite topics. And that's workshops. Now, for those of you that don't run workshops, you totally should. If you want to know kind of specifics about how we set those up, you can check out the book that I wrote, called F insurance and, you can hit the F insurance book.com, and I laid out in a chapter in that book pretty much exactly how we've set this up.

But, I see a big mistake, and I want to just kind of clarify to you why people do this, but also, how to, how to fix this to improve your conversions on workshops because they can mean a handy tool for new patients in your practice as well as developing a brand in your area.

People are becoming familiar with your brand and developing a lot of trust with them. I think it's honestly one of the most effective ways to do that because you're spending so much time in front of people and you're helping them. You're asking for really nothing in return. And, so you build a lot of reciprocity and Goodwill with people, which is a great way to start a relationship and almost think of it like planting a seed.

You know, it, it, it doesn't always, you know, grow right away and turn into a new patient. But I've gotten people from workshops two years later after I've taught, taught a course just to remember the experience, and they reach out to us about it. So. Here's the number one mistake I see in workshops and what you should do about it.

So the most significant issue that I see is people try to teach, to their, you know, sort of unique abilities and things that they are good at, but it's too complicated for people to understand and you lose them. So here's what I mean by that. It can be hard for us to take our PT hat off and put on ours.

Elementary school, you know, hat where we have to explain this stuff at like a fifth-grade level because this is not what other people do. And to be able to take a complex topic. And simplify it down to something that people can understand in a short period. It can be tough to do.

And you know, we go to all these continuing ed courses where, you know, there are complex topics that we learn, a lot of tests that we've taken in school that we've gone to, and that's great if you want to nerd out with your friends, go for it. But the place to not do that as workshops, and it's because.

These will do not understand that. So you will confuse them, and they will not know why they should work with you. And the way that we run our workshops, neat. All the Intel, the entire intent of it, are two things. Number one, we want them to have a good time. We want them to feel like it was fun and worth their hour that they decided to spend with us.

The second piece is we want to show them that we know how to make changes in their body in a short period, in a positive way, and now you can say what you want about this. Yes, the changes are transient. We understand that they are not forever. You know, we get a down regulatory effect. Improved range of motion for a short period, and then it goes back to whatever the state was before that.

Right. That's not the point. The point is that if I can help somebody touch their toes that haven't been able to test their toes in years, all of a sudden, I have their attention and. Not just their attention, but if I can use that as an example when there are 20 people in the room, and I can show that I understand how to manipulate the body positively in a short period, and not even me, they be able to do this, right?

Like we teach a lot of self-release techniques, a lot of kind of MobilityWOD, a variety of, Kelly style exercises where we have these significant interest session changes on purpose because. There is something that people like to see, and they're easy to teach in a big group, and you get these sort of profound short term changes, in, in, in, in this hour that you spend with them.

So what you don't want to do is have them do, you know, things like, I don't know, rolling patterns on the ground or talk to them about developmental kinesiology or whatever other stuff that maybe you like. And. You think she is fantastic, which is, which is cool. Don't get me wrong in the clinic when you can solve a problem with somebody.

Yeah. They feel difficult, right? But you're not giving them a quick win. All you're doing is you're making them feel bad about themselves. We want people to get a quick win and feel like, Oh, cool. I just was able to do this thing to myself, and now I feel better. That's awesome. Like, what is it? What else does this guy have to say?

That's it. We want to build trust. We want to show them that they can take ownership of their own. You know, mobility and motor control. And then we want to have test-retest that allows them to see a difference. And I think that's another massive piece of, of the success in workshops that we have, is the fact that we want people to be able to see.

Intercession, and again, a transient change that they're able to make to themselves. Because if I can establish some amount of trust and then have a one on one conversation with somebody or follow up with an email because it allows me to. Give them specific exercises in a, you know, in a video, a form, and now they have access to that.

That's a big win for me because I've built a lot of trust with people that have spent an hour with me. And then I get to follow up with them with specific homework to their email and help them even more, and then have a call to action for them to, you know, give us a request that's a jump on a, you know, a phone call station or come in for a visit or an in the, in the workshop, I'm doing the same thing.

So it's an opportunity for you too. You are positioning yourself as an expert in this area. And the best way to do that is to show them, prove to them that you can help them feel better, you know, at least for a short period. And I mean, I've had a lot of people that have done workshops that we've had never come in for anything else, but have followed up with us and be like, man, my back goes a ton better.

And they may never have come in to see us, but they send us people because we help them and astronauts in return. And they, they, that's pretty—a rare thing. And for them to have that and have built enough trust with us to where they send their friends and family to see us, even though they've never seen us themselves.

That's a pretty cool thing. And that's what I like so much about, about workshops. If you're not doing these, you really should. And, and if you're if you're. You know, scared to do them. You don't like to speak in public? Neither do I., And it's something that I forced myself to do, and I've gotten much more comfortable with it.

But every time I go to teach a workshop like my heart is racing, I have to like work on breathing before I show something because I'm just not all that comfortable in a, you know, in a, in a public speaking arena, which is odd. After all, I've done a lot of it, and intentionally I've sort of tried to go after it and lean into it.

That's the biggest thing. I guess that's all I should've said. If you don't remember anything, I mean, stop trying to show people how smart you are and just start showing people that you can help. And the more you can show them that you can help, the more likely it is they're going to come in and want to work with you.

And or. Send people that they think you'd be appropriate to help as well. And the workshops that you do will be much more worth your time, beneficial to those people as well as your practice. And we'll start to build an excellent brand for your company in your area. So guys, as always, I hope this helps.

I hope you're doing workshops, and I hope this little piece of information makes them better. And thank you so much for listening to the podcast.

PT Biz is an organization run by entrepreneurs for entrepreneurs — the industry leader in entrepreneurial coaching for clinicians. We've worked with more than 1,000 successful business owners from around the globe to help them achieve more profit, a better quality of life, and a faster scale to their business.